A brief history of Cape Horn...

The following are excerpts from Across Rushing Waters (Mark E. Parsons, 2002), describing the trails around Cape Horn in the 19th century (click on an image to see a high resolution version):

Chapter 4 The Valley of the Rushing Waters

"It was up this trail from the landing at Cape Horn that the Indians found their best spear fishing from the Washougally Camp. A few miles inland was what we still call Salmon Falls and was then easier reached by boat around Cape Horn than overland or upriver from their camp.

It was to the West of these falls they built their temporary shelters to which they could come during the fish runs and to which today's fishermen eagerly await. These trails overland also went to cleared hunting grounds (Mabee Mines Road) and into the berry fields further up the slopes. These same trails also went over the high mountains and into Indian Heaven, located in the interior of Skamania County.

The Cape Horn trail passed just to the east of the high bluffs and into Canyon Creek. Splitting here, one went over the hills to Salmon Falls (Salmon Falls Road), and the left trail traveled down the creek to its confluence with the Washougal River (Canyon Creek Rd.)

Chapter 5 The First Settlers
“American settlement at Cape Horn began in 1846, when James Walker and his family established a homestead near the landing just upstream from the cliffs of Cape Horn. Walker had come west by ox team from Pennsylvania in 1844. Until 1855, when John and Sarah Stevenson settled at Cape Horn, the Walkers were the only settlers in the vicinity.

“By 1875, ten families were living in the Cape Horn vicinity, and by 1882 that number had grown to fifteen, warranting the establishment of a post office in June of the following year (Ramsey 1963:41, SCAS 1958-1959). According to one source (SCAS 1958- 1959), the post office was initially located in “the old dock building” at the river landing, and later moved to the home of Loren Wright, on his farm “at the top of the hill.” Mail was brought to the community by boat from Bridal Veil, across the river, several times a week. The community of Cape Horn was relatively dispersed, and consisted of individual family farms scattered over hundreds of acres north and northeast of the river landing. By the 1880s, the landing itself had become a small hub of business and commerce and a regular stop for several Columbia River steamboats (McClure 2002:7).

“For several decades, the Cape Horn community and residents of the nearby Prindle area relied on steamboats as their principal means of transportation to larger communities such as Portland and Vancouver....A schedule of service for 1912 indicates that the Dalles City made two stops a day at the Cape Horn wharf (Timmen 1973:214).

“Cape Horn landing, also known as Breslin Landing (Williams 1980), was an important distribution point for agricultural products from local farms. According to the 1900 census, the majority of adult men in the Cape Horn Precinct worked as farmers or day laborers. Articles from the Skamania County Pioneer in 1902 and 1903 indicate that potatoes, prunes, apples, and hay were among the items shipped to markets from Cape Horn. Cattle and sheep were also raised on local farms. Some of the men from the Cape Horn area worked for logging companies in the surrounding area. A small amount of commercial salmon fishing was done seasonally using horse drawn seine nets. A bar in the river near Cape Horn was ideal for seining.

“The year 1907 marked an important turning point in the history of the Cape Horn community. The population of the village swelled with the influx of about 150 men employed in the construction of the Seattle, Portland & Spokane Railroad. Photographs in the collection of the Columbia Gorge Interpretive Center show a tent camp on the hillside west of the landing, and for months the men labored in the construction of a tunnel through the cliffs of Cape Horn. By June the tunnel was largely complete, and in November of the same year, the first train came down the line through Cape Horn. With the establishment of a rail line along the north bank of the Columbia, the era of steamboat transportation began a decade-long decline. Small railroad stations were established at Cape Horn and nearby Prindle (McClure 2002: 8-11).

“In 1926, construction of the Evergreen Highway (State Route 14) was begun across Cape Horn. While blasting a ledge across the face of the cliffs in November 1927, the construction crew triggered a landslide that swept through Cape Horn landing. An eyewitness reported that, “Old man Stevenson’s house was pushed right out into the river...The slide took the houses and went across the railroad tracks. It took the docks and the landing and filled the dock channel...The slide pushed like a bull dozer, and it took the track and fill right into the river...” (Bethea 1980:9). Apparently, the force of the slide created a wave that swamped boats across the Columbia River (McClure 2002:11)”. 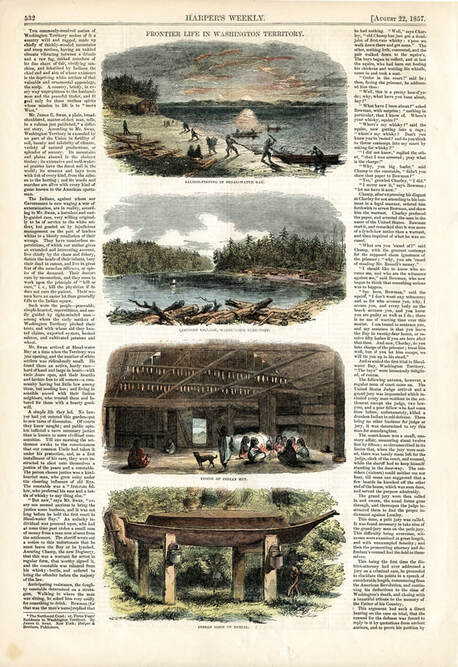 Frontier Life in Washington, from Harpers magazine, 1857.
​Cape Horn Conservancy thanks Ronald Edge for providing high resolution versions of all the images on this page.